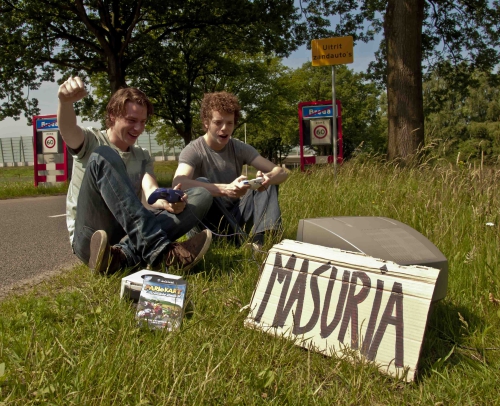 There once was a city. The city was called Breda. A magnificent city in the south of the mighty kingdom of the Netherlands. Then the day came that there was only darkness, thunder and lightning. For days and days it rained and stormed. This normally NEVER happens in the mighty kingdom of the Netherlands. People lived in fear as they were terrorized by old people complaining about noise and having to walk long distances. But the biggest problem was the reluctance of drivers to take hitchhikers!

And so it was that on a surprisingly sunny day the Greek god Hithikossos send the two titans Luca and Oscar to Breda. Their mission was to prove that it is actually possible to hitchhike from Breda all the way to Masuria, Poland and collect money for Viva con Agua at the same time! They didn’t have to look far to find other companions with the same purpose. It we’re the great and fearless Germans from Tramprennen to show the two titans the way on their first odyssey.

So on that faithful day Luca and Oscar looked at each other and said: “We hitch at the break of dawn!” As they were followed by other teams of brave hitchhiking warriors, pushing further and further out of Breda and into unknown territory…

Curious about what happens next? Contribute to the story by donating to Viva Con Agua and we’ll keep you updated as we race to Poland for Tramprennen 2013!

No messages sent yet...