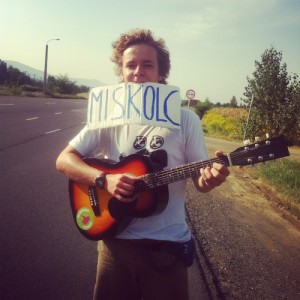 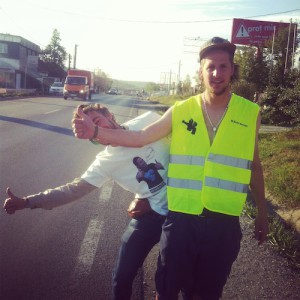 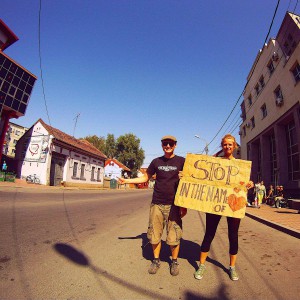 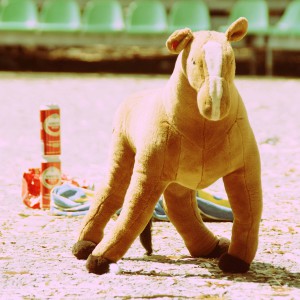 Rule number one – not only when hitchhiking – is to treat other human beings with respect and tolerance. We do not tolerate any discriminating statements or other actions in reference to skin-color, sexuality, origin or gender against anyone. We say NO to racism, sexism, xeno- and homophobia! Please make sure everyone agrees to this!

Not acting in accordance to the above is the only way to get disqualified from Tramprennen as a whole.

1. You will care about your safety and the one of your hitchmate

Since it exists, Tramprennen has had no major accidents, nobody got mugged or hurt. Knock on wood. To keep it that way:

Trust your gut instinct and your experience!

2. You will have fun during the race

3. You will honor The Hitchhiker’s etiquette

The Hitchhiking’s etiquette is courtesy towards the drivers and a general fair-play rule, even more during the race.

It happens a lot, that teams are waiting at the same hitchhiking spot and need to share the same petrol station for example. Etiquette grants the initial right to ask drivers or to pick the spot of choice to the team that first arrived. If the place is big enough, split it up into equal and fair parts, so both teams can move on.

Don’t forget also to grant the same rights to other hitchhikers, even if they don’t do the same in return! In the past, the teams always worked out compromises – it’s up to you to live the fair spirit!

Read more about the etiquette on Hitchwiki

This years startingpoints are not chosen yet.

A Tramprennen-team consists of 2-3 people and has to be a mixed-gender group.

This means:
A team must not consist of people who all share the same gender-identity.

If you have questions about this or if it is not possible for you to join Tramprennen in a gender-mixed team, please contact us! Together we will find a solution.

Routes - where are we hitchhiking along?

As in previous years we will have different routes, but like last year we will only publish the different regions the teams might visit this year. Everything else will be published at the start. We want to let chance play a big roll. After all, this is what hitchhiking is about: having a great time and experiencing a load of crazy coincidences on the road- no matter which road exactly!

Some things can be assured: all routes will meet another route at some point during the race, all routes go through both, little villages and big cities.

Race Day – How does a stage work?

Day off and buffer day

Anyone above 18 years old is encouraged to take part in Tramprennen, whether one is an experienced hitchhiker or a hitchhiking-virgin ;)