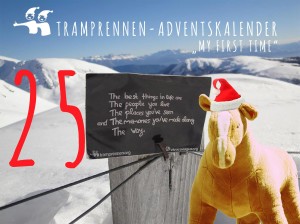 When I was thinking of my first time,

I realised, that back then I had no idea

how important – or at the same time better normal-

hitchhiking would be for me one day, 9 years later.

So, I was travelling in central america, and after a while

I was really „on a shoestring“, more than lonely planet ever could think of.

Well, I came back from an island in Honduras to the mainland,

with me a blonde swedish girl, and my friend from Guatemala,

but without any idea to go next, because the expensive stuff like volcano boarding

or whatsoever, we couldn t affort to do.

We thought „ok,then, just lets go to the next city, and we ll see what happens!“.

You know, public transportation works almost like hitchhiking, you wait beside the road,

just anywhere, and wait for the next bus to come, somewhen.

So meanwhile you can strech your arm a little and hope for some pickup trucks to pick you up.

We were three people, and it went so fast and easily, that I couldn t even think of how dangerous and stupid it could be, like in the eyes of my mother, to try hitchhiking in a place like Honduras.

I just jumped on the back, giggling, grapped my sunglasses and we started to scream and sing against the wind, taking photos, to be sure to never forget that moment of total happiness, freedom and carefree living. 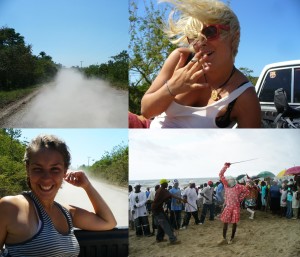 After a while the driver stopped, and asked us, where we actually wanted to go, good question..

So, we asked him, where he wanted to go and if it would be possible to join him.

He told us, that we could stay at his place, the only house in town with electricity for occasional parties and one of those would take place that night! Great! Half an hour later we were in that little Garifuna village at the beach, and we probably were the first white tourists who came there.

The whole village was really welcoming, they made us try the best medicine, which was a really good rum with herbs, cooked a great fish soup and invited us to join their tradional dance and stick fight against bad winter ghosts, as I remember. And afterwards we really had a fun party until sunrise in the house of my first lift, a place I d never would have come to without my thumb!

Then it needed a while and a few more experiences and well, the tramprennen,

to become more normal to use autostop. And not only for adventurous trips,

but more as another type of public transportation, even to my parents home for christmas right now,

so hohoho, thumbs up and go!