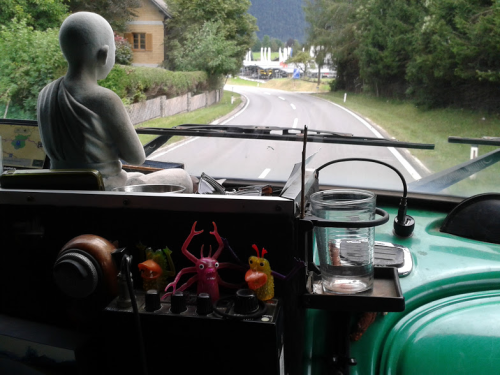 How far would you go to win a stage?

To win your hearts will be our victory! ;-) ... ... alright alright, for the more practically minded, those who really want to see us sweat it to win a stage (and where should we look for it? and how should we transport it then? come on, we are hitchhikers, not a moving company (although there is in fact a guy who is both) but still... a stage. of steel and wood. is really the last thing we want on our backpacks!), so let me instead invite you to consider this: All the world's a stage. And all the men and women merely ... free riders - on its course through time, space, and narrative. So, well, we could go ON stage, I guess. Enter Babka

What shouldn't be missing in your hitchhiking-backpack?

Our stuff! We hope it's still there! Damn hippies! This is a warning: Next time you see pants you like, better think twice before taking them, and check if somebody is about to put them on. Right?! We don't wanna be stuck in the no-pant zone on racing day... A couple of necessities are very dear to us: the little monsters (Dimi lost his twice ;-( ), cooking utensils, babka, a hammock, ...

"Deine MUDDA macht sich Sorgen!! Jetzt pass ma..." I quickly slam the receiver to abort an anxiety-ridden curse lecture before it gets out of hand. But conversations have a way of carrying on over connection "I phoned your grandma. She keeps asking about you." Slam! "She wants to know whether you eat well, you should not sleep under bridges or on the road and she wanted to send..." the phone! "She says you should not put trust..." into! "Where are you??!! I looked up your position and could not find it on,,," the wall! Grudge and resentment are being baked into an emotional memory brick in the furnace of family wrath. When my signal "accidentally" breaks off again, a grandchild (who is not entirely innocent themselves and was not clever enough to extend the distance from generational authority) is now receiving a good trashing - for the wrong reasons; but at least, emotion is released - just to be sure they do not follow a bad example! ...We do love each other. Of course, Babka has an own opinion, though. We will try to capture it for you... when things have calmed down a bit.

How do you imagine your final arrival to Baltieji Lakajai?

It might not be the final arrival, but I hope we arrive. We keep misspelling the name, and pronunciation is a puzzle - so we might circle around it, but we'll surely find some lake. There is this lake from the Krombacher ad. It's officially in NorthRhine-Westphalia, but Dimi claims he has seen it with his own eyes, and will tell those inclined to listen that: It is actually in Lithuania! Yes! This said, maybe we will be a little drunk. Lying in styrofoam would be a great way. No? Wait till you see it!

The Babka team is proudly looking back at a one-year tradition of Eastern European roaming success, doing some good work, and gaining quite some notoriety in the process, while enlisting a bunch of new folks to the team, who had not originally planned this. Extra strengths: social and ecological mind +3: Our first true ride was to the waste paper collection point! Arguments +2: "Can we take the bus? Sorry, we don't have the right to pay." Last year's final position: 34, 43, or 86 I think. Extra daily challenges completed: 1. Sponsor and friends' challenges completed: all except 1. Boasting: still pending. Team members joined during the race: 2 to 4 (depending on the timeframe).

This year, we at Babka are not only paying our dues and due respects, but have introduced some significantly-serious-new-shit-upgrades to to move faster (while slacking longer) and keep you, dear my Laffaballoo(c), at the edge and end of your wits. You may well choose not believe what is being presented to you, but, rest assured, we will rarely venture far from the road of reality.

The starting point is, in fact, the starting point. Huge pre-start kudos for Anne and Roger, hosting this year's Lüneburg crew with XX, before...but we are getting ahead of your self. There will be babka, there will be monsters, espresso, pelmeni, Svyturis, pants, ironing, gardens 'N' roses, a lot of cooking, singing, joining and crossing. Don't be shy, support us. Each Zloty a ztory. - The first one is on the team: This is the story of how we did not come up with our name (but could have): We conceive the team as your Homies on the road, mais j'insiste, comme nous avons des marques distinctament francaises reconnues par tous sauf les Francais, alors s'il vous plaît, viz ä French accent [bischen üben: acht Cent; Eck-zähn, äch-zend, ät-zend]: and when Roger joined the team, maintainant et voilà: les 'ômis. Almost true story! - Friend, regards most fervent, evermore Yours truly, Cheerio Endyuri 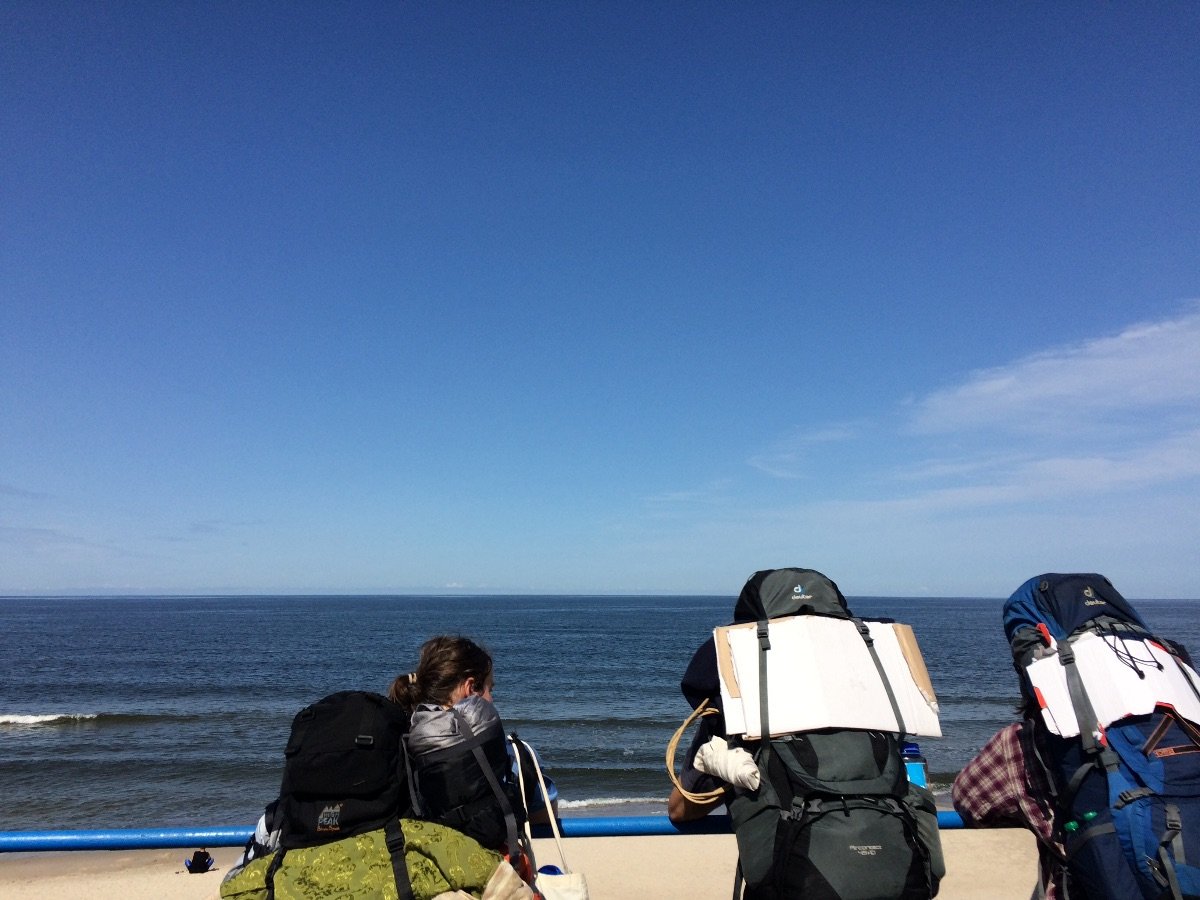 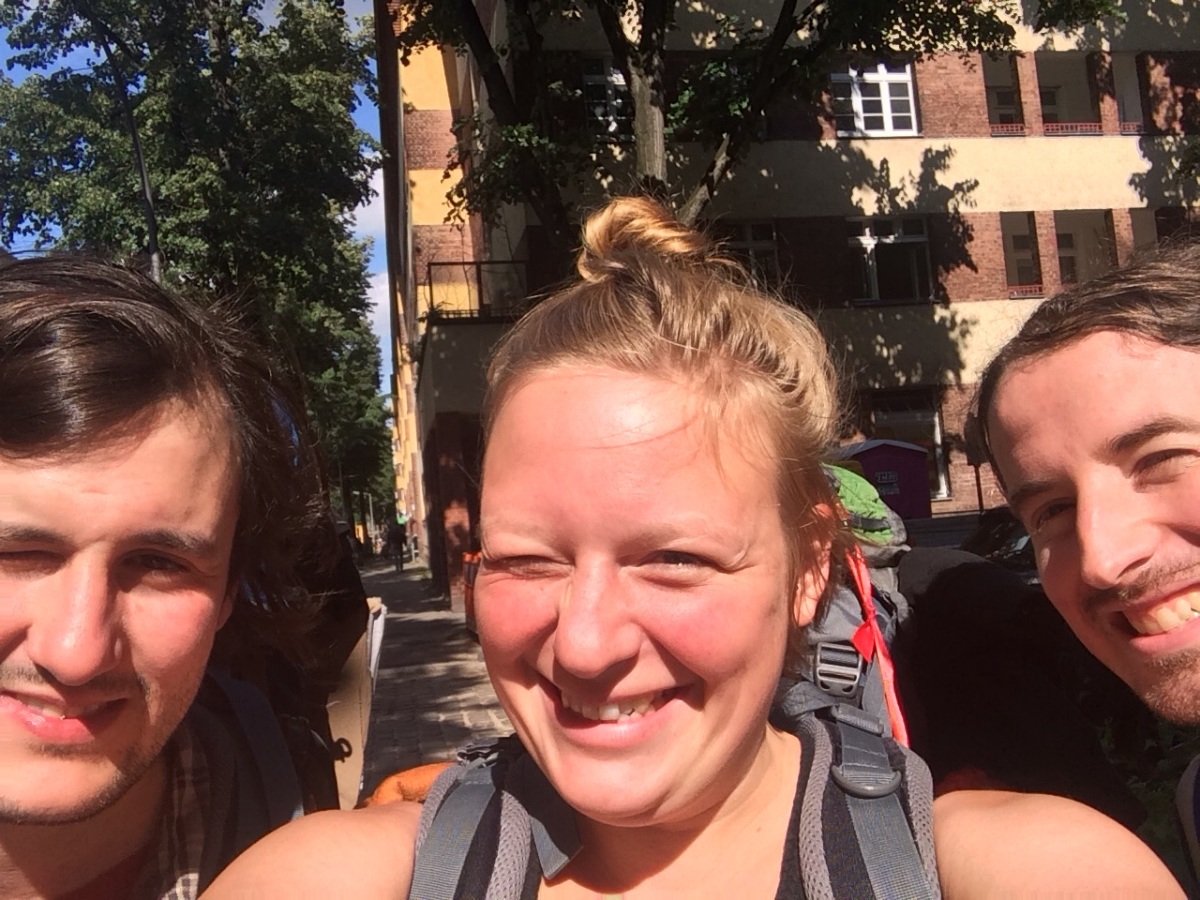 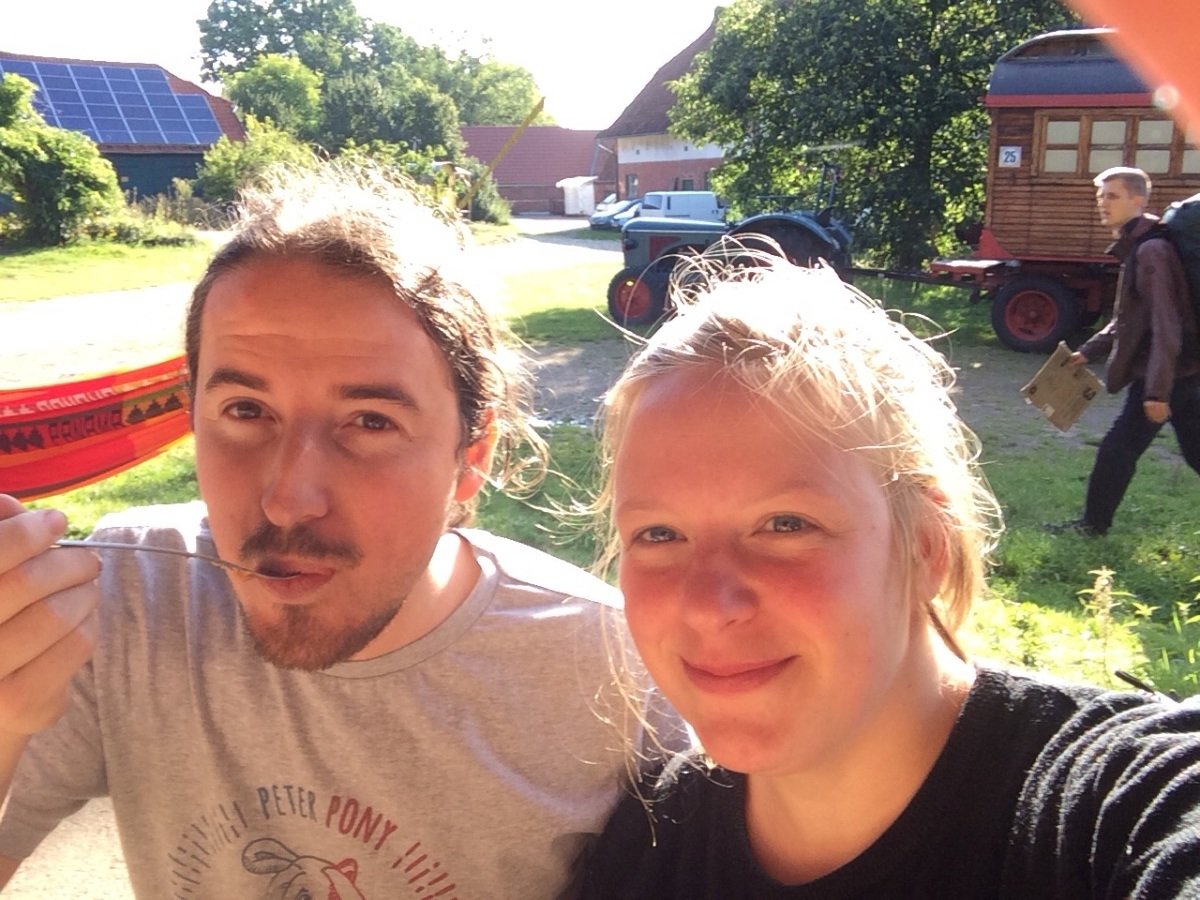 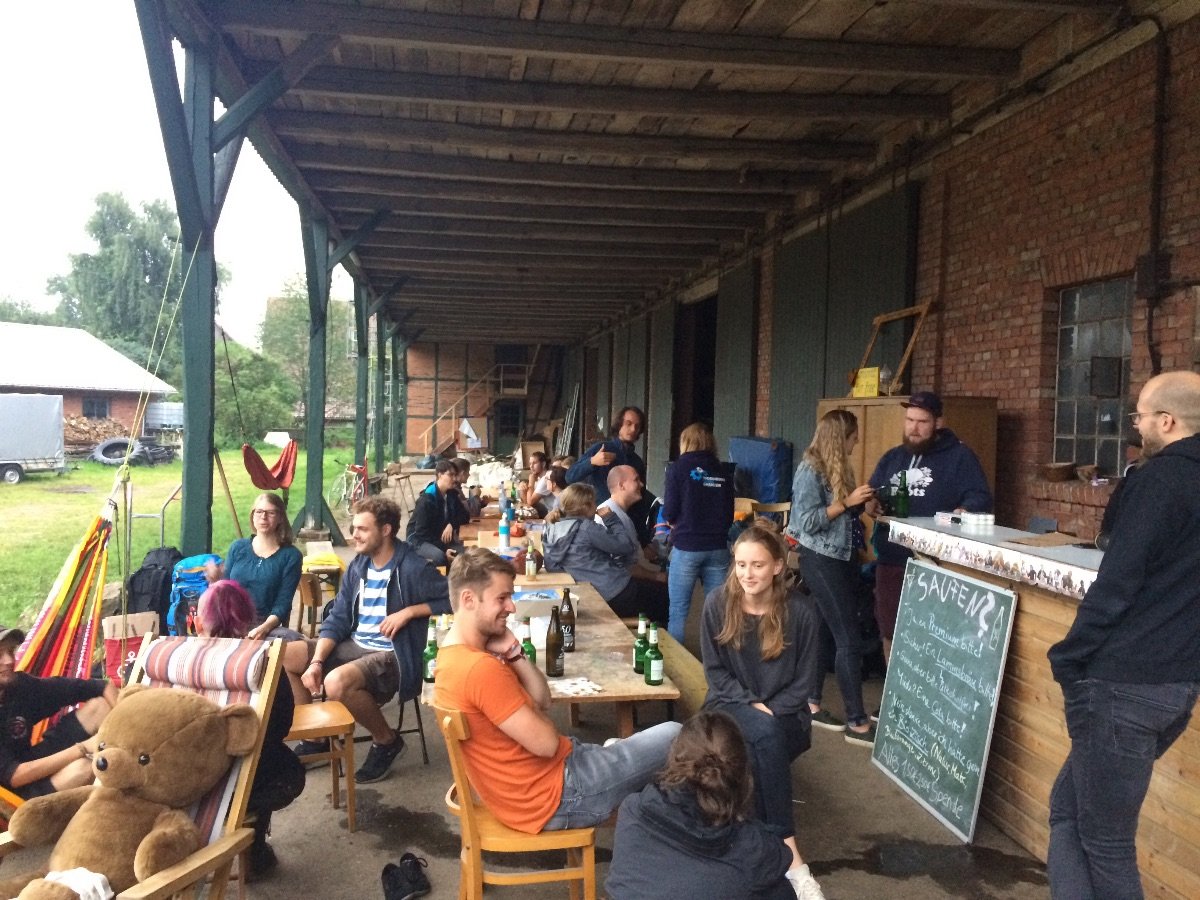 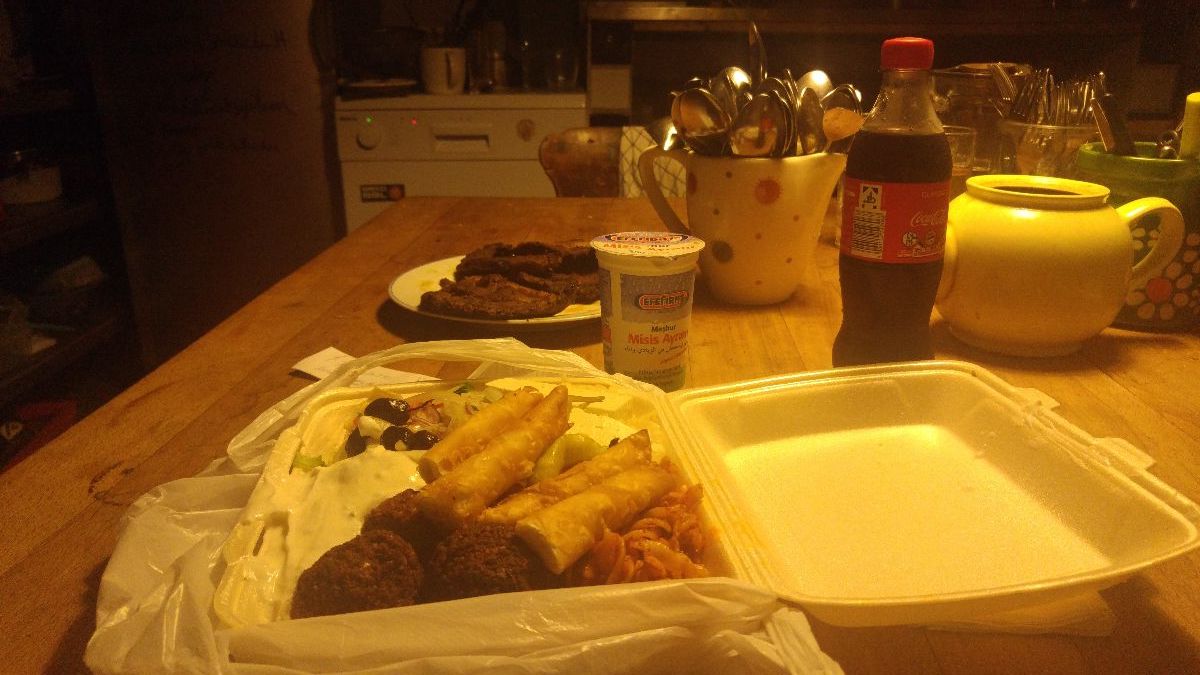 When, at the 39th hour, your team is welcoming you - like pure gold.