Half a year after our ways parted in Transylvania, the memories of our hitchhiking adventure to the southeast of Europe might start to fade. The warm get-togethers in Görlitz and Bad Grönebach, the hot and dusty roads of hungary, the euphoria, loud singing, puzzled lifts and cheering at the final destination in Bontida, all of that should not be lost in the turbulences of our daily lives. That’s why now, at the beginning of the 20s, we want to use this opportunity to look back and celebrate Tramprennen 2019 appropriately. So take a seat and get your favorite snack out – it might take you a few minutes and some fernweh-moments to get over while reading this. 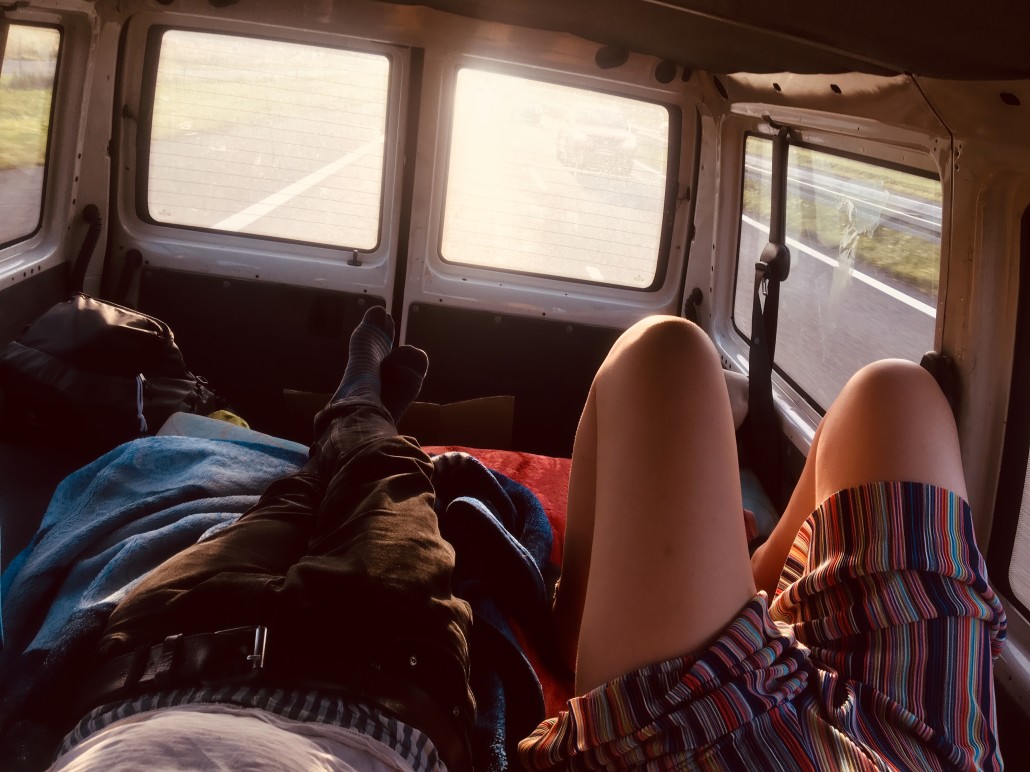 After Tramprennen headed to Albania, Bulgaria, Lithuania and Bosnia & Herzegovina in the past years, 2019 it was about time that the ‘long and winding road’ of hitchhiking would lead us to good ol’ Romania with it’s untouched nature, great hospitality and it’s rich cultural heritage again – of course the Palinka should not be forgotten either as it sweetened a lot of our nights on the road. Of course, when planning to hitch to Transylvania, we didn’t forget about our goals and values! Many people do not have the luck of owning an EU-passport which turns borders into unpassable or even deadly obstacles. That’s why we want to symbolically overstep and pass borders – those on the maps and those in the heads – and initiate discourse with all kinds of people to emphasize: No Borders! No one is illegal! Two weeks prior to our arrival to our final Destination in Bontida, Transylvania with this motto, our journey began in the german cities of Görlitz and Bad Grönebach. Once again, many hitchhikers from different places and countries packed their sleeping bags, clothes and other belongings into their backpacks and hit the road to our starting points!

The familiar picture of small arriving groups of hitchhikers – sometimes with smaller, sometimes with bigger backpacks – dominated the 16th of August in Görlitz and Bad Grönebach. In the bavarian starting point, Hannah’s garden (thanks again!) about ten hitchhikers arrived during the day whilst 50 of them made their way to Görlitz, took of their backpacks, pitched their tents, helped with cooking or doing the barbeque, ignited the campfire and enjoyed the slowly arising feeling which would dominate the next two weeks – Hippiekacke basically! In Görlitz, we were lucky enough, to be able to use a part of beautiful Kühlhaus, a combined camping space and cultural centre where the people supported us with a kitchen, projector, a great space and all other thinkable support. A big thank you for this, too!

Both starting points officially started Tramprennen with the sunset by watching historic film material of Tramprennen 2009 and a subsequent Guide to the rules, the route lottery, Dos and Don’ts, safety tips and other information. After the short get-together of the freshly put together routes, everyone really was in the particular Tramprennen-Mood! But there was a little downer. Due to DHLs super reliable service, the hitch-packages, containing markers, a 1st Aid kit, T-shirts, portable ashtrays and other gimmicks for the contemporary hitchhiker had not arrived in time. While the Görlitz-people spent the night around the campfire with guitar music, good talks and some drinks, they hoped for the next morning. 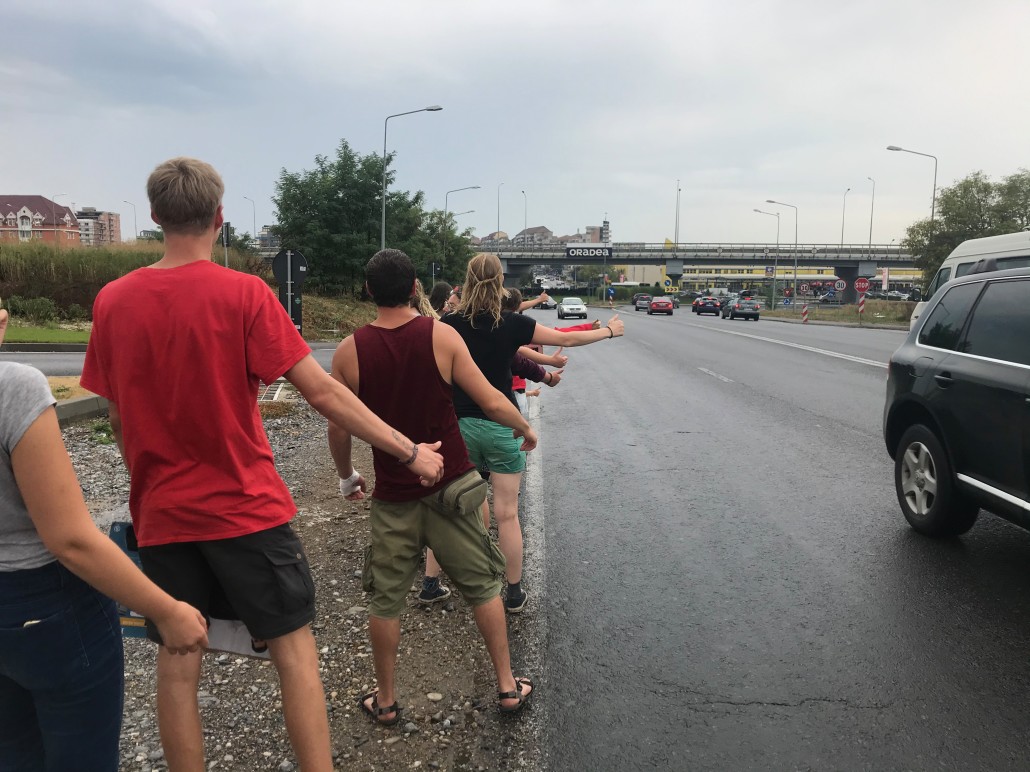 On the following morning however, the people in Görlitz were not woken up by a yellow DHL-Truck and the Hitchpackages but only by soft rain and the more competitive hitchhikers, who had started to pack their tents early, had breakfast and were looking forward to the starting time on the first day of hitchhiking! In this desperate situation, two teams luckily sacrificed their first days of Tramprennen to wait for everyone’s hitchpackages in Görlitz to transport them to Kraków later (a bit shout out to “Der Zwergenaufstand” and “Pogopingus Titelverteidigung”! You rule!).

The rest of the hitchhikers in Bad Grönebach and Görlitz however started on time and hurried towards the outskirts of the two cities – all of them hoping to reach the daily destinations in Poland and Czech Republic first. What happened in the subsequent two weeks was neither predictable nor is it possible to sum up all the funny, heartwarming, crazy, and unforgettable situations, lifts, places, people and coincidences along the way in this text. The unbelievably nice lifts, that invite you for food or bring you a lot further than they originally wanted to drive, the communication errors, the head-to-head races of various teams (for example on the polish highway towards Kraków), the great landscapes, the cultural exchange, the friendships which formed along the way and long panel discussions – all of this is something that will have happened to all participants of Tramprennen 2019 at least once. But of course there also were things, which didn’t happen to everyone – such as lifts to the wrong direction, heavy rains in Slovakia, babylonian language mess-ups, the Barkeeper at the route-meeting in Vinne who at some point just gave out beers and shots for free (which made the following hitchhiking day tough for some), the Albatrosses and – inexplicably – eight palettes of non-alcoholic beer. Not only the last mentioned caused a lot of laughter and stories, why all might tell our grandkids at some point.

Something that almost everyone experienced too, was the desolate conditions and political situation of the Sinti*zze und Rom*nja in many cities, regions and countries we passed by. Also, the poverty and living conditions of many other inhabitants of the areas we travelled were often shocking and strengthened the feeling, that the borders, which exist in people’s heads and which cause a variety of discriminations and structural, economic inequalities have to be addressed and attacked!

At the end of a hitchhiking day, when the teams, one after the other arrived at that days destination, the amount of stories and anecdotes that happened to the individual teams during the day always was enormous. Also absurd situations and the positive and negative encounters with the people in Poland, Czechia, Slovakia, Hungary and Romania quickly resulted in small legends and running gags, which our team owners often were responsible for, too. The hitchhiking pirate crew and Peter Potty, our hitchhiking ceramic-toilet (which became our mascot and after Tramprennen made it all the way to Georgia by hitchhiking), are good examples for the impact, that the tasks given to us by the team owners had on Tramprennen 2019. We wrote or rewrote songs (for example Konnys Karrieresong or Karin Staneks “Jedziemy Autostopem”) and added them to the growing list of Tramprennen evergreens. It was easy to lose one’s sense of time in this big, beautiful mess of formative experiences, stories, friendship, stress, frustration (whilst waiting for a lift), sweet relief and euphoria (when this lift finally stopped), talks, discussions, parties and cultural impressions. The fact, that the time, the day of the week and the date were somewhat irrelevant was business as usual for many people who participated in Tramprennen more than once already. Nonetheless, is still caused a barely explainable sense of freedom on one hand and to some sensation of confusion on the other. Often we asked ourselves how many days we had spent on the road already – the feeling varied between two days and two months. Thus, it wasn’t surprising, that the arrival in Bontida was predominated by feelings of outbursting joy and excitement. At the same time, many found themselves being sentimental and sad about the fact, that our journey was almost over already. The feeling of ‘No Borders’, which had taken so much space in our heads, was soon to disappear and we all were aware of that. 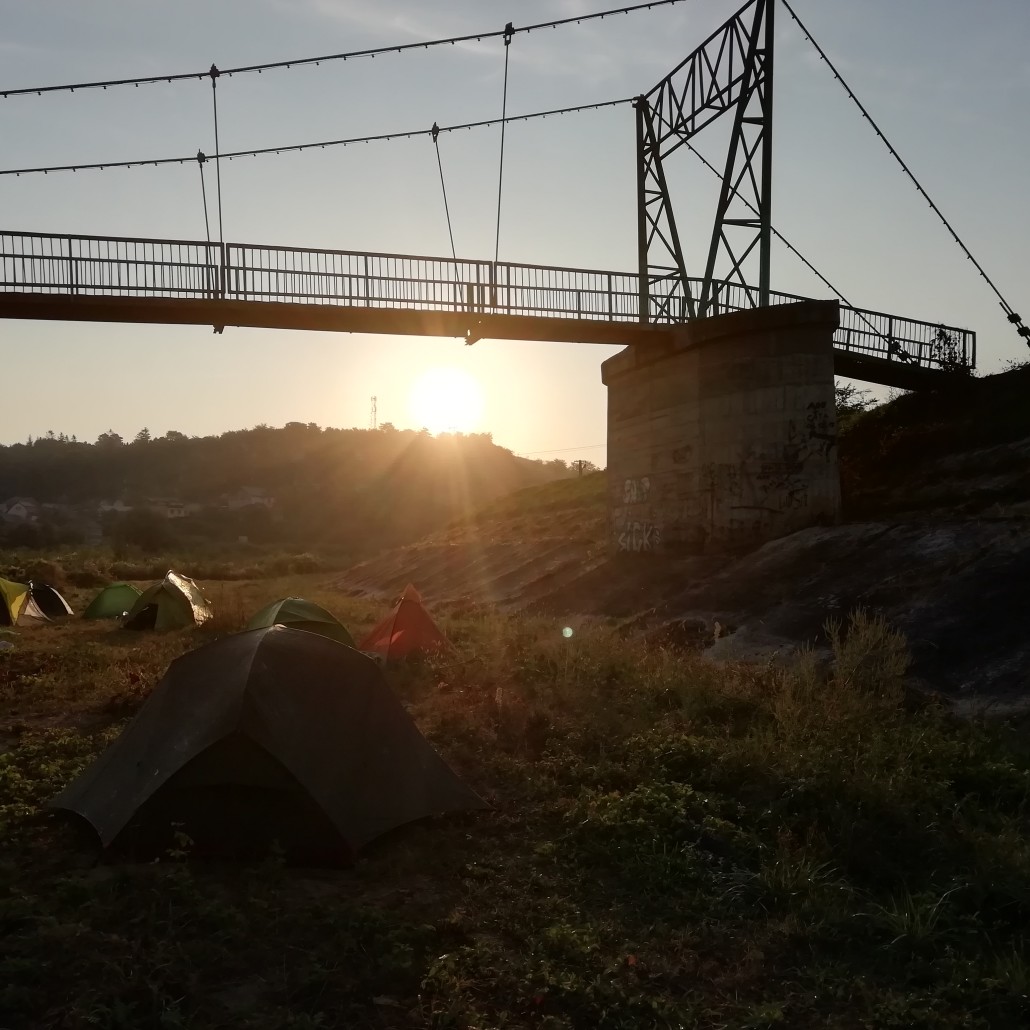 But before Tramprennen 2019 was completely over, we all experienced two awesome days at the Secret Garden Camping in Bontida. There was great food, good music, great hosts (THANK YOU SO MUCH GUYS), a small group of Tramprennen veterans who arrived earlier and prepared everything for us, a pool and a lot of ginger palinka – that all combined with two weeks of great friends and great stories resulted in a blur of great memories that none of us will forget too soon. On the second day in Bontida, we decorated the campsite with many, many pieces of hitchhiking-cardboards with all our destinations on them and started our final ceremony (due to our motto of “The Hitchhikers Guide to Transylvania” we initiated it with the song “So long and thanks for all the fish”). Because we were a rather small group, we were able to properly introduce all teams and what made them such a special part of their individual routes (Pangalactic Gargleblasters, Paranoid Androids or Babel Fish). During the ceremony we sang songs, laughed, drank and enjoyed ourselves while the sun set over the hills of Transylvania. After that, it was time to party. The last Ginger Palinka was drank, the last group hugs were made, “Jedziemy Autostopem” was sung a last time in bad polish and on the next morning, the ways parted again and the hitchhikers had to find new destinations – from central Europe to Greek, Turkey and Georgia – because this is what we took with us besides the friendships and the good memories:

Once more, a great number of people was able to hitchhike across the European continent and proof: Autostop’s not dead! Travelling by hitchhiking once again turned out to be a good starting point for exchange which went beyond national sectionalism, for discussions and as a clear statement of our believes: No Borders – we want to overcome borders, on the map and in the heads of people, despite all lingual, economic and cultural barriers. 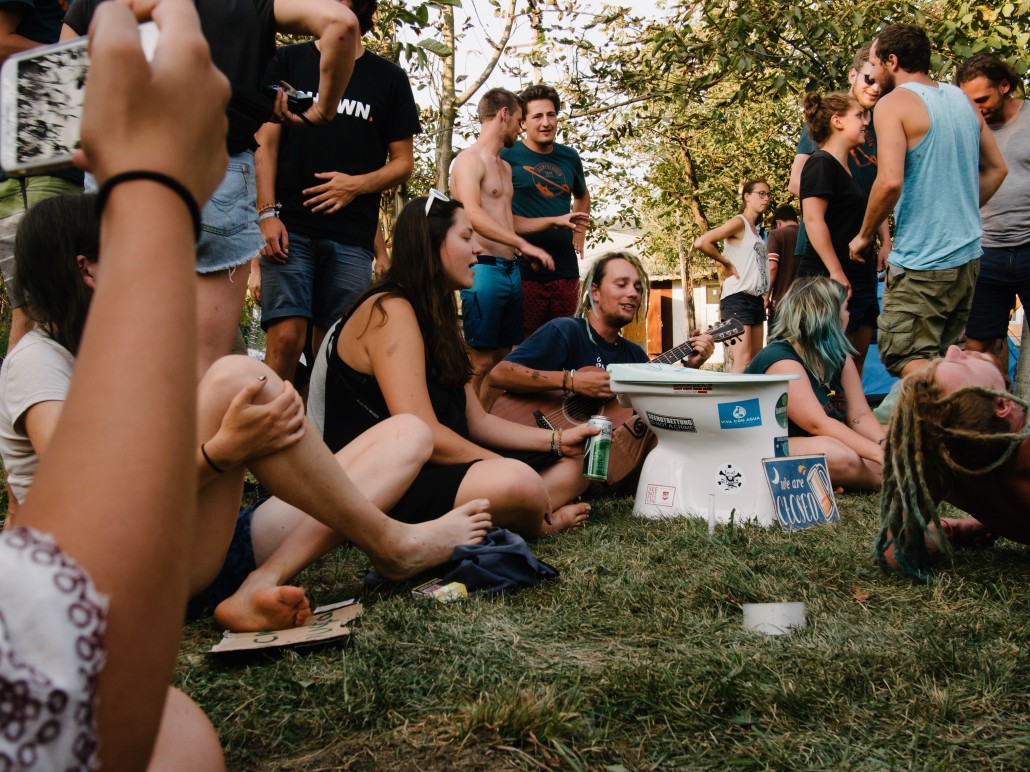 Furthermore, it were not only the great memories, our humanitarian beliefs and the awesome participants, that made Tramprennen such a special experience. The great team sponsors and team owners also had their fair share in this. Thanks to your support, we were able to raise 5777€ with (only) 29 Teams on Tramprennen 2019. As we announced before, those 5777€ were donated to Sea-Watch, who do humanitarian duties where Europe reveals humanitarian and political failure on an unbelievable scale. Thank you!!

Of course, we also have to say thank you to those, who were involved with organizing and planning Tramprennen 2019. Whether it was meeting all over Germany to plan it, screen-printing the shirts, designing graphics or packing the hitch-packages: without this voluntary commitment Tramprennen would simply not exist. If YOU want to support Tramprennen 2020 with your ideas and commitment, don’t doubt to contact us via: gro.nennerpmartnull@ofni – In addition, the dates for the first planning meeting will be announced to the participants of Tramprennen 2019 via mail shortly.

And last but not least: Dziekuję, Děkuji, ďakujem, köszönöm, vă mulțumesc, thank you and Dankeschön to all the lifts, to the drivers who shared long and short parts of our journey with us and proved with us, that Autostop’s not dead!

So long and thanks for all the fish, 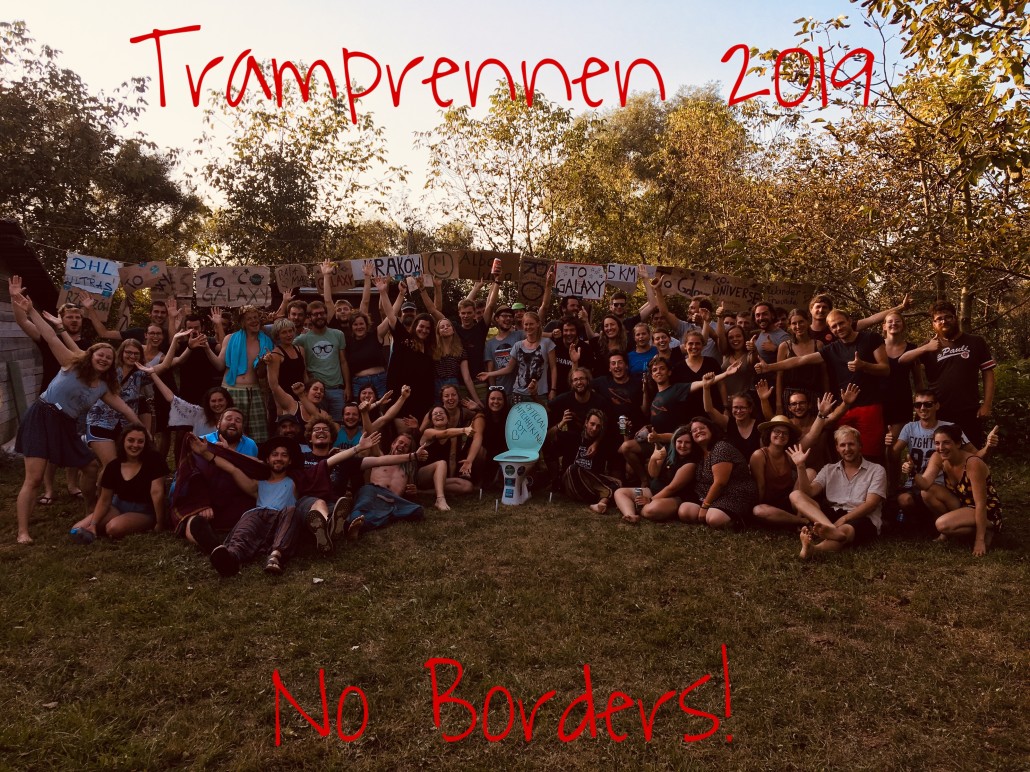 Stay tuned within the next weeks, news about the Tramprennen 2020 are coming soon!