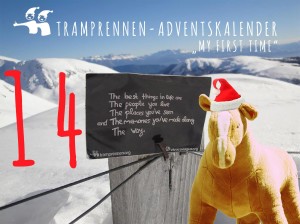 Ho,ho,ho- here we go! Christmas time is coming and before we hitchhike home for Christmas (haha…) we want to present you the first Advent calendar on tramprennen.org! Every day until Christmas (or even longer) we want to present one story about the first time we used the best way to travel: hitchhiking! Have fun with the stories! And you are more than welcome to add your own experience! Just send it to gro.nennerpmartnull@ofni! Whoop,Whoop!

Long time ago, in a land far far away, at a time when I was still young and innocent, or as others might discribe it, inexperienced and naive, I was standing at the edge of a road in Christchurch, New Zealand.

A friend, let’s call her Jasmin (that is indeed her actual name), and I wanted to get from the East to the West coast of the South island. We were on the one hand too stingy for the bus and on the other hand relatively adventurous. So we decided to stand at the street leading to the west coast with a sign (which we decorated with cute flowers) that read „Grey Mouth“ (lovely, beautiful city, right my dear Kiwi friends?!).

Jasmin and I had previously discussed to not get into a car if either one of us did not feel comfortable about the lift and to communicate this secretly and silently through eye contact. After just a few moments a black car with tainted windows pulled up, a middle aged man emerged from it and without much speaking he loaded our backpacks.

With fear in our eyes Jasmin and I faced each other and immediatly understood – both of us did not feel comfortable with the lift, though neither of us was brave enough to say anything.

So we got into the car and our adventure began.

In the beginning not much was said and when ever the man tried to make small talk our answers were short and we hoped he did not hear the fear in our voices. To break the deafening silence I asked what all those buttons on the dashboard were for, as a crack came from the radio and an unintelligible voice could be heard. Our driver who apparently had understood everything took his radio device and answered. To our great surprise it turned out that we sat in the car of an undercover police officer. Our driver was on a dangerous mission against the notorious substance „weed“. A couple of weeks earlier he had caught the man who had supplied the whole west coast with this horrible drug.

This explained a lot! Our little village on the west coast too had trouble getting hold of more weed. While smoking weed normally was a social activity during which a group shares a splif led by the motto „puff puff pass“, it had now turned into a rather secretly done thing where people would smoke their joints behind their houses in order to not having to share.

The undercover cop told us he was now following up on those investigations and our fear turned into eager interest. We felt like Miss Marpel or Sherlock Holmes. We were so super, mega, hyper cool, being privat investigators listening to the police radio and hearing crazy police stories.

Our first hitch hikking trip was a full success. Oddly the work of our driver did not bring as much cheer to our village as it did to us. In fact it lead to many people switching to „legal high“ out of despreation. Meaning that people started smoking bath supplements and incense. This on the other hand then leads to new naive and adventurous anecdotes, but that is a different story…