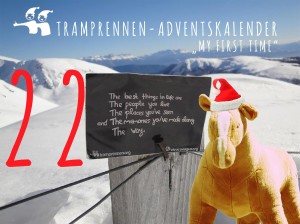 The translator would like to express his consternation that the author didn’t manage to learn English during the innumerable hours, nay days that people left him standing next to the road due to his lack of hitchhiking talent and skanky appearance. English may have helped this lost cause of a ride bummer to meet people who could explain him the virtue of thumbing. The following story shows that his brother and friend both knew that he needed help and seemed to always be a minute late with their advice. Almost like they observed him to make sure he made it all the way, but still had fun watching his mistakes. And fun it must have been, considering the pace our author’s brain works in, looking at the first ten lines. Let’s hope together that our little hero still has people who smile and encourage him when he tells a hitchhiking tale, instead of explaining him all the things he did wrong. We know it’s too late to teach him. So please enjoy the ensuing narrative and smile and encourage our little fighter to continue putting up his thumb against all the odds that somebody will pick him up. He already knows that “luck is with the dumb.”

Wonderful. Made it to Berlin. Could have gone worse!

In order that it’s going well, I had to and wanted to follow some small steps, since there are not many rules for hitchhiking (editor’s note: They said in order to not overexert his competences). There’s just one rule: Someone will always pick you up. This made me conclude: You will always make it to the destination. Always.

At the very least, I accomplished that when hitchhiking for the first time.

It was in May or June 2008, going from the “Green Heart” in Kiel to the Couchsurfing Beach Camp in Berlin.

In order to make this one rule possible, there are a few easy things to consider – what should I do, what should I rather not do?

With a wild pumping heart, I headed off to my chosen spot with a fancy, well legible “Berlin” sign. My thick backpack including a tent with me, I stood at the side of the road like the next best stereotype of a hitchhiker. Well visible for each car and with loads of space to stop. So far, so good. These were the first things I had to keep in mind. Wuddich und Malte made the trip a day before and gave me these clues.

Just like you would expect, my first ever lift stopped after four minutes: An old VW “Bulli”. I entered the “Bulli” and we hit the B404 direction Berlin. After not even an hour, this treat ended and I was outside again in the middle of nowhere between Bad Segeberg and Bad Oldesloe. Directly behind the guardrail at a constricted B404 construction road. That I could have asked for the driver’s destination while entering the car, you’re saying?…well.

Hint number two by Wuddich and Malte appeared immediately via SMS on my Nokia 3210 when leaving the Bulli: “Let them drop you at a place where cars can stop easily.” Touché.

As you know, luck is with the dumb and just like that, less than two minutes and I sat in the car of a soldier on the way to Berlin. Plenty of confused ramblings later, he had to get off the autobahn and dropped me at a gas station. At this moment clue number three reached me:

“Oh and in case you have to change cars, let them drop you at gas stations on the autobahn and not away from it!! You won’t get away from there.”

Refueling was possible, calling this directly at the autobahn would be a big stretch though.

Thanks for nothing, mates!

Thus I chatted up the limited amount of drivers and got lucky with a young couple from Berlin, had to wait for ten minutes though before we could get started. The reason for that was the distinct health consciousness of the girl: First eating the salad by McDonald’s with a lot of emphasis (“all this other unhealthy stuff is a piece of shit!”), followed by smoking a menthol cigarette. All of that outside of the car, smoking wasn’t allowed inside. Once in the car, all the soliloquies and conversations between the inmates stopped, Techno was cranked up and the wild ride to Berlin kicked off. At some point I heard a soft beep between the smashes of the 5000W bass machine and saw clue number four on my cell phone: “After you arrived in Berlin, take the metro to station whatever (I forgot), we can walk from there.”

Less than 15 minutes later, the Beamer roared by this station – the couple let me out and I arrived at the Camp in Berlin. Wonderful.

Some bizarre stuff happened there – amongst other things, we involuntarily ran into Pascal Pernod, who hosted all the participants of the first Tramprennen at his place in Lausanne around three months later. The fact that we were at the same Camp in Berlin was only detected a few years later though. Another future host was our neighbor “I-brew-coffee-with-vodka”-Mario, who in turn harbored the whole crew in a scout hut in Linz in 2009.

I have no clue how the return journey went. I certainly made it to the destination.