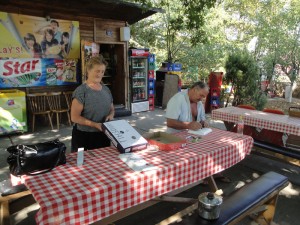 With only a few meters of difference in altitude, a gravel road leads from Lake Surduc to the main road connecting Lugoj and Deva.
A few days ago Hitchhikers from around the globe had found the small village of Fârdea via that very gravel road. Just as they had done 3 days before, an elderly couple is still sitting in front of their small roadside Shop waving to the debarking travellers. We are part of the last ones to leave the lake. As we pass the aforementioned shop, the old lady calls out after us and presents us with hand-drawn hitchhiking cardboards: “Lugoj”, “Timisoara”, “Arad” – cities we’d have to pass on the way back. Her husband emerges back from inside the house with loads of more cardboard, sits down at the table in front and continues drawing signs. An unexpected gesture, to say the least. We don’t really know how to react. Sometimes you just have to stand and wait shrugging to say “Thanks”.
The Tramprennen for Viva con Agua ended as it had started – unexpected, full of surprises and beautiful.

“The grown-ups have an affection for numbers. If you tell them of a new friend, they’ll never ask for relevant information. They’ll never aks you: How’s the sound of his or her voice? What games does he or she like? Does the friend collect butterflies? Instead, they ask: How old is he or she? How many siblings are in the family? What’s his or her weight? How much money does the father earn? Only then do they believe they know a person.”

In accordance with these true words of Antoine de Saint-Exupery from “The Little Prince”, I’d like to direct all of those interested in numbers to the end of the article.
Who? Where? When? And how many? Yield interesting answers indeed, but do not have a place at the beginning of a travel report. Also I do not want to tell you about how almost all hitchhikers made it to Romania in a wonderous fashion.
Why should I in the first place? Hitchhiking is something entirely normal, nothing out of the ordinary. Where there’s a road, one can hitch. A car with available space can be boarded. We’ve done it, over and over – from Belgium, Denmark and Germany to Romania. Hop in, get out, embark, disembark. Wait, chat, gaze out of the window, reach, keep going. What more to tell? Not to exciting, after all, is it?

But do imagine the following: 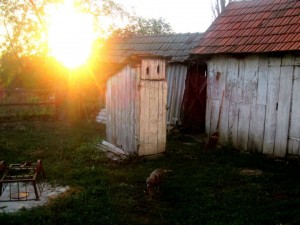 To both your left and your right are other teams also putting their thumb out while you wait for your next lift. One of the others proclaims: “Watch out! Wanna bet, we’ll be gone before you?! The beer at the destination is on the loser!” Then imagine a green Ford Taunus with a laundry machine in the trunk to stop and pick you up. While on the road, the driver tells you, that the German comedian Karl Dall was hired by the Porsche company in the Mid-80’s to spread Manta-jokes (the Manta was an Opel/Vauxhall produced sports coupé and at that time still viable competition to Porsche). The dude in the Ford drops you in the middle of nowhere and you do not have the slightest clue as to where exactly you are. With the help of you’re way too large-scale map you attempt to let the curious villagers know why you are here, what you are doing and why and where to you want to leave again. You get invited to home-made Schnapps.
The bet is pretty much lost – the other team has sent a text and let you know that they’re a few hundred kilometers ahead. Or are they simply pulling your leg and are standing somewhere else entirely? You don’t know, but you can’t influence their fate anyway…
You’ve got to walk it for a few kilometers and grab some plums from a roadside tree. And while you’re promenading along the road, looking to identify animal shapes in the clouds and holding out your thumb unmotivatedly, an old 1985 Dacia stops for you. Red velvet on the ceiling, “Wunderbaum” and a Jesus figurine are dangling from the rearview mirror. He doesn’t understand a word of what you are saying and in tun you do not understand what he is saying at all either. But when the shabby radio plays a distorted “Chery Chery Lady”, both your thumbs point upwards. Hey, Modern Talking, Dieter Bohlen with a mullet. You start laughing. And because you laugh, so does the driver! 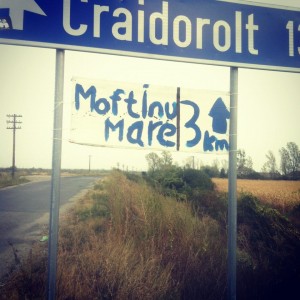 You leave the car – Handshake, Photograph, Exhaust dust, Ciao! “Awesome dude!”, you think and keep hitching with a happy expectancy of what else is to come. Soon the next car stops – that’s how the rest of the day may unfold, if it was up to you. You pass a Sinti/Roma settlement and the driver starts cursing: “These f*cking gypsies, living off our money, all criminals without the desire to work!” His wife nods her head in agreement and shakes it thereafter in the direction of the Roma. You shake your head as well, but for a very different reason: You ask yourself, why these two would like you and your German passport instantly and invite you to ride with them, while harboring nothing but hate towards the largest minority in their country at the same time?!
The “Everyday-Racism” (“Papers, Please!”, publikative.org, German article) prevelant in German society unfortunately exists everywhere else in the world as well.
You ask the man, whether he truly believes what he just told you: Do you truly believe, these children voluntarily die of Hep A? Do you truly believe, they would not rather have access to the medical system as do you and your wife? (see this article on eurosurveillance.org for reference) Do you truly believe, not a single Roma wants to work and live differently? Do you truly believe their chances on the job market are anywhere near your own? Do you truly believe they work the informal sector just because it’s more fun??? He shrugs his shoulders and concentrates on driving. A little later you get out, are saddened and mentally worn out. Maybe he’ll think about this conversation later and reconsider his notions…
At the next gas station, you meet another team again – the race is still on! It is sizzling hot. Strawberry and lemon ice cream provide comfort. A pick-up truck stops, you fasten the backpacks with belts in the back and hop on. Direct-lift to the destination! Other teams are already sitting on the back of the truck. Stories are passed and Dieter Bohlen pops up again. That dude somehow manages to stay a hot topic, even amongst hitchhikers in Romania.
You reach and the team from the roadside start is already there. Oh well, beer’s on you. But the next stage is waiting and revenge will be furious.
You lie down to sleep on the village football pitch and happily remember that the day after is in front of you. Appointment-free and full of more adventure.

Content not available.
Please allow cookies by clicking Accept on the banner
All of the above is a mash-up of experiences condensed to a few paragraphs. But is not figurative prose. All those things (and more) do happen on the road. Way too much could be told to fit the scope of this final round-up of Tramprennen 2012, which is why this year we’d like for everybody to get a chance to tell their own story. We are “Generation Internet” and a whole lot of our communications happen online. As for this story compilation, we want to go classical – and print a magazine. A magazine containing stories, photos, comics, impressions, ideas and thoughts. Everyboday may participate!

We’d like to finance the project with your help via the crowdfunding platform startnext.de Check it out and invest in something worthy!
For 10 bucks you’ll receive a copy of the magazine, for 30 a magazine and a Tramprennen 2012 shirt. And since we are now talking numbers anyhow, we might as well continue right there:

Worth pointing out: 15130 Euro of donations have been collected for Viva con Agua’s current WASH-project India!

Thanks to all hitchhikers, lifts and donors in the name of Viva con Agua!
The PayPal donations have been received and the debit method donations will be debited from the donor’s accounts in the near future. All donations are transferred directly and without a deduction to the “Welthungerhilfe” (World-Hunger-Relief), which is head of the project. This projects, as the others we have co-financed, grants clean drinking water access to a number of people that didn’t have it before – what substance is more important to man than water?

The next year will come for sure.
Where to? How many routes? When?
We haven’t got a clue yet. But we will attempt to provide you with information earlier than this year. Check the website, check the facebook page.

we arrived! Easter-Hitchhiking-Days
Scroll to top