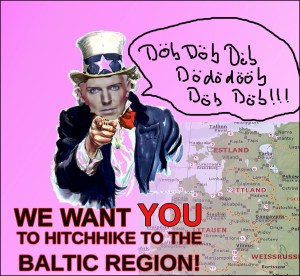 2017 brought up something new! After years of the same discussions about: “Where to go this time?” this year we made a voting with all the people who joined Tramprennen during the last 9 years. According to the comments you entered in the poll, we chose six regions, that could be the destination we are hitchhiking to on Tramprennen 2017 from August, 18th to September, 2nd.

And here are the results:

And: If you’re up for joining the orga-team in 2017: We will have a big meeting in February (24th to 26th) in Leipzig! If you want to join us, just send a mail to gro.nennerpmartnull@ofni.